It’s carnival! If you still don’t get the spirit, better not go to Berlin. Here’s the proof with this add from the town’s public transportation company BVG:

„Helaaf! It’s carnival! And here is the train with the people who care about it in Berlin.“ 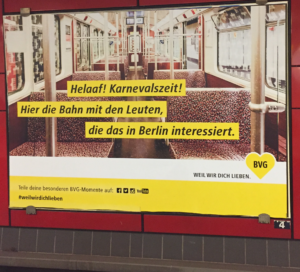 „And who is saying this is not a Brazilian“.  EMBRATUR, the Brazilian Tourism Institut, has launched an ad campaign to present the host cities of the Soccer World Cup this year. Created by Neogama BBH and produced by Primitivo Filmes, a series of videos will be shown in all countries which are considered strategically important for potential visitors coming to Brazil. The agency’s creative brains had a brilliant idea: why not have people from these countries presenting Brazil to their fellows?

So they invited people from Argentina, Germany, Columbia, Chile, United States, France, England, Italy, Japan, Mexico, Portugal and Uruguay to put their voices on the videos, speaking Portuguese and introducing the beauties of the host cities. Only in the last few seconds, they show themselves to the camera and say the sentence that opens this article in their own language.

Take a look at the german film on Salvador down here. You can also watch some of the films on the website of Neogama/BBH, or at this article published by São Paulo’s Marketing Magazine meio & mensagem.

Brazilian Magazine Isto É has recently published an article comparing two of the most powerful women in todays international politics: Brazilian president Dilma Rousseff and German chancellor Angela Merkel. Both are being called the new „Iron Ladies“ in politics but, as the article states, going in opposite directions.

While Angela Merkel apparently has a lot more in common with the original „Iron Lady“, Margareth Thatcher, standing for a strict fiscal policy and budget cuts, Dilma believes that public investments are necessary for overcoming a „brutal recession“. In her speech during the last summit of Ibero-American leaders in Spain, past November 17th, Dilma criticized austerity as an instrument for recovering from the european economic crisis and recommended that Europe should not repeat the mistakes of Latin-American leaders, whose restriction measures under IWF’s pressure during the 80s and 90s have only led to an even worse recession. For Dilma, Europe should focus on growth, „exaggerated and simultaneous fiscal consolidation in every country is not the best response“ and budget cuts should not lead to even more reduction of social benefits for the population.

The brazilian Magazine illustrates its article with a picture of Dilma and Spain’s King Juan Carlos that means more than words could say: Dilma is holding Juan Carlos’s arm, while the King leans himself on a walking stick. Check it out here.